Kennedy traveled to New York from his summer home on Cape Cod to deliver a major address to the United Nations General Assembly. 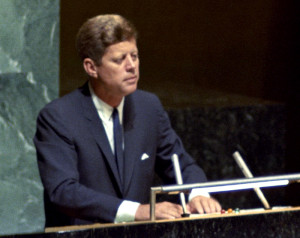 While vowing to remain firm against territorial aggression, JFK challenged the Soviets to a “peace race” that included a ban on new nuclear testing and an eventual disarmament for all nuclear weapons.