President of the Sudan

President Kennedy hosted a state dinner for the President of the Sudan Ferik Ibrahim Abboud.

prologue from Henry V
drunken porter scene and Duncan murder from Macbeth,
Seven Ages of Man speech from As You Like It
a scene from Troilus and Cressida performed in Civil War period costumes
Prospero’s soliquoy from the Tempest 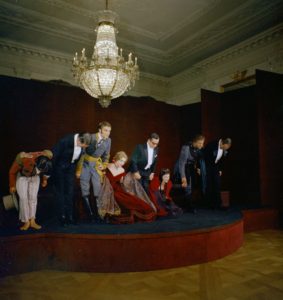 Actors who performed Shakespeare excerpts for President of the Sudan

Dinner guests included Sir Ralph Richardson and his wife, Jackie’s English professor at Vassar Helen Sandison and the Sudanese Ambassador and his wife.