Shortly after 8:00 am JFK took off in a helicopter from the South Lawn of the White House in a ten minute flight to give opening remarks in a ceremony at the just completed, “futuristic” Dulles Airport. 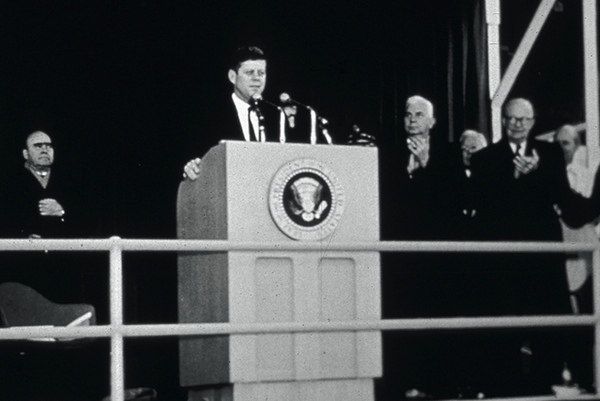 He was greeted by a crowd of 60,000 people who stood outside in a rainy, 54 degree day. As Hail To The Chief played, JFK made his way to the podium where he was accompanied by former President Dwight D. Eisenhower, Janet and Allen Dulles (brother of Eisenhower’s Secretary of State John Foster Dulles, the man for whom the airport was being named), Chief Justice Earl Warren, Aline Saarinen (widow of the architect), and Najeeb Halaby, who was the head of the Federal Aviation Agency (and the father of Lisa Halaby, who later became Queen Noor of Jordan.)

Eisenhower spoke first and gave a sentimental oration about his Secretary of State and a review of the origin and construction of the airport. JFK, by contrast, talked about the America of his day and beyond, saying that Dulles Airport represented the “aspirations of the United States in the 1950s and the 1960s.”

After finishing his remarks, he watched an aviation and aerial display of jets taking off and landing and a performance of the Air Force Thunderbirds.