Enjoying the still, cloudless weather which was unusual for that time of year in Palm Beach, JFK continued his weekend visit in Palm Beach,.

In the morning he held a meeting with state Democratic officials notifying them that he planned to make Palm Beach his re-election campaign headquarters. He spent part of the afternoon watching the Chicago Bears play the Green Bay Packers on television.

Later in the day, he watched the recently released movie Tom Jones.

Afterwards, his motorcade left for the airport. As usual, Kennedy shook hands with the officials who had gathered to see him off. Photographer Bob Davidoff was there taking photos and waved a goodbye. JFK smiled broadly and waved back, saying “see you in a couple of weeks.” 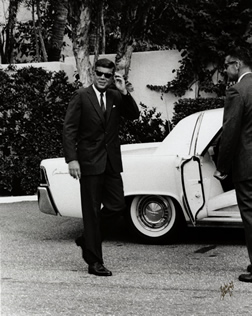