JFK was in Nashville, Tennessee where he gave the convocation at Dudley Field celebrating Vanderbilt’s 90th year. Seen in the photo below grabbing Kennedy’s elbow is Vanderbilt University President Alex Heard. 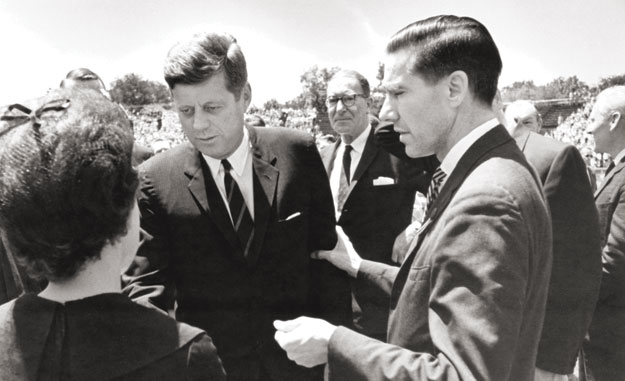 Kennedy showed courage in his straightforward and direct comments concerning the escalating racial tensions in Birmingham and elsewhere in the South, particularly considering that Vanderbilt University was still strictly segregated, except for the Divinity school and several graduate programs.

In his remarks, he asked his listeners to “reject temptations of prejudice and violence” and exhorted community leaders “to work together so that all Americans enjoy equal opportunity and liberty under the law.

He then went on in a seeming address to the assembled Vanderbilt glitterati when he said,

In these moments of tragic disorder, a special burden rests on the educated men and women of our country to reject temptations of prejudice and violence and to reaffirm the values of freedom and law on which our society depends.

During the ceremony at the football stadium in front of 30,000 people, JFK also pushed a gold key that caused a dynamite blast that initiated construction on the Cordell Hull dam on the Cumberland river.

Afterwards, JFK traveled to Muscle Shoals, Alabama to celebrate the 30th anniversary of the Tennessee Valley Authority and to Huntsville, Alabama.

He was met and escorted in Alabama by George C. Wallace, who had declared he wanted segregation forever.