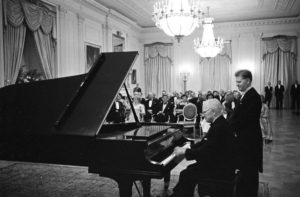 Harry Truman at the Piano, next to Eugene List

Truman then took to the instrument and played a Paderewski minuet on the same piano that he used when he was President, which had been relocated from the library.

His daughter wasn’t Bess, bess is his wife’s name. 🙂