JFK was in New York City after having flown in the night before from Washington. In the morning he traveled to the Waldorf-Astoria Towers for meetings. His first was in Suite 31A where he met with an elderly and frail Herbert Hoover. After 15 minutes he went up to Suite 37A where he met with retired General Douglas MacArthur.

Kennedy scribbled notes summarizing the conversation with MacArthur, whom Kennedy found to be engaging and a perspicacious observer of events. He noted that the General advised to avoid a military engagement in Laos at all costs, but should fight a battle of containment in the rest of Southeast Asia. 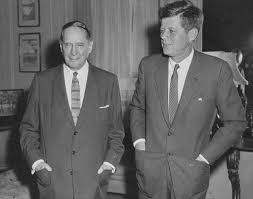 JFK and Douglas MacArthur in the Oval Office