President-elect Kennedy was in Palm Beach and he was invited to a gathering at the home of Palm Beach banker H. Loy Anderson to honor former President Herbert Hoover, who was in Florida to christen the Hoover Dike in Okeechobee, Florida, the site of two infamous floods in the 1920s. 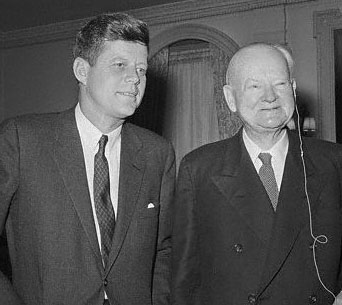 JFK was urged to attend by his father Joe, Sr. who was also invited and who thought that it might be a good photo opportunity for his son.

Once at the party, Joe and Jack Kennedy huddled in a corner, plotting strategy as to how to best exploit the opportunity. When JFK finally approached Hoover, he extended his hand and said, “Mr. President, I want you to know that I feel very proud to shake the hand of a past president, and I would like to know if you have any advice for me in terms of managing the economy.”

Hoover, who was quite deaf, despite wearing hearing aids only nodded his head and said, “Nice to meet you.” JFK then repeated his question and got the same head nod but no answer.

Kennedy then reportedly turned to his father, who was by now standing next to the two men, and said with a laugh, “See those two hearing aids? He hasn’t heard a goddamn thing I said!”