JFK was in Philadelphia and did a full day of campaign events.

He began the  morning with an appearance at the Penn Fruit Shopping Center. At this campaign stop, an advanced text was distributed, where he gave fairly lengthy and detailed remarks delineating differences between himself and Richard Nixon in medical care for the aged, teachers salaries, agricultural policy, unemployment, and strategy for peace.

Also, somewhat tellingly, JFK questioned Nixon’s ability to be honest and straightforward with the American public,

Mr. Nixon and the Republicans are unwilling to reveal to the American people reports containing the facts about our prestige, the truth about the Nixon-Khrushchev talks, the basis of the present missile gap as contained in the Gaither report, and the facts about whether we are heading for a third recession prepared by the Department of Commerce… I have the utmost confidence in the American people to face all the facts, however harsh, and to provide for them.

In his spoken remarks at the shopping center, he greeted Congresswoman Granahan and Mayor Dilworth and spoke in fairly general terms about his hopes for America,

JFK was at Temple University in Philadelphia. Kennedy wore a rain slicker and spoke to an overflow crowd, including students hanging out the second story windows across the street.

Bismarck once said that one-third of the students of German universities broke down from overwork, another third broke down from dissipation, and the other third ruled Germany. I do not know which third of the student body of Temple is here today, but I am confident I am talking to the future rulers of America in the sense that all educated men and women must bear the discipline of self-government.

He told the crowd that he wanted a fifth debate with Richard Nixon and would not mind if Nixon brought President Eisenhower along so that he could debate him also. 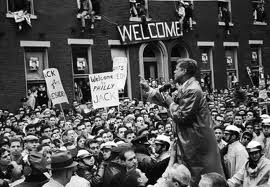 At the end of the day, JFK left for an overnight flight to California