This day marked the 25th anniversary of the Social Security Act and presidential candidate John F. Kennedy made a trip to the home of Franklin D. Roosevelt in Hyde Park, New York.

JFK had two motives for making the August 14, 1960 trip. The most obvious was to deliver an address to the Golden Ring Club on the grounds of the Roosevelt National Historic Site. This address to a group of senior citizens was to pay homage to FDR and to woo an important constitutency. 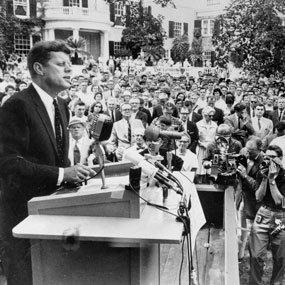 JFK at Hyde Park on August 14, 1960 for 25th anniversary of Social Security Act

The other and more difficult task was to seek and win the support of Eleanor Roosevelt for his run for the Presidency. Mrs. Roosevelt was a major power in the Democratic Party and she had supported Adlai Stevenson for President in 1960. Roosevelt was cool to the idea of Kennedy being the nominee as she felt that his commitment to pushing the Civil Rights agenda was less than robust.

JFK was scheduled to meet with Roosevelt at her Val-Kill home two miles west of the FDR National Historic Site. The meeting was nearly postponed after Roosevelt’s granddaughter Sally was killed the day before in a horseriding accident. However, true to her nature, Eleanor insisted that they push on with the meeting even through JFK offered to reschedule.

The meeting, described as ” intense and productive” resulted in both parties gaining their objectives. Kennedy agreed to make a firm stand on Civil Rights and Eleanor agreed to throw her support to him for the election, even going so far as to make a campaign ad for him where she stated.

“John F. Kennedy came to visit me at Hyde Park. We talked together and I learned he was truly interested in carrying on many of the things which my husband had just begun. Mr. Kennedy is a strong and determined person, who, as president, will provide the leadership for greater social security benefits which the social welfare of a civilized nation demands…”

After the meeting at Val-Kill, JFK traveled alone to the FDR site and addressed the crowd,

“… Standing on this quiet lawn – this spacious and soothing scene – it is difficult to recall the furious battles which were fought by the man who lies her in honored glory… Today we commemorate one of those battles – passage of the Social Security Act of 1935 – the  most important single piece of legislation of social welfare in the history of this country. It was 25 years ago this very day that Franklin Roosevelt could say, after a long and arduous struggle, ‘Today a hope of many years’ standing is in large part fulfilled’ and with that he signed his name and social security became law.

“It is fitting that we celebrate this annivesary. It is essential from time to time that we pay tribute to past greatness and historic achievement…. We celebrate the past, to awaken the future…”