JFK was in Wisconsin on this February 26, 1960 campaigning in the west-central Chippewa Valley in prime Hubert Humphrey territory. Kennedy, who won the April 5 Wisconsin primary, was accompanied by his wife Jackie, brother Ted, aide Ken O’Donnell, and ever present Dave Powers.

He flew into EauClaire in the morning after having to spend the previous night in Wausau after his plane the Caroline had developed engine trouble. He emerged from his plane hatless and wearing a blue overcoat and a blue pin-striped suit. Jackie wore a bright red cloth coat and matching tam and long dark blue leather gloves.

Once he arrived he visited the towns of Chippewa Falls, Bloomer, Menomonie, Durand, Mondovi, and the Eleva-Strum area, making a roughly counterclockwise circle through the valley before returning north to Eau Claire. 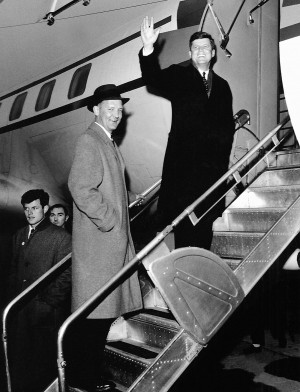 JFK on February 26, 1960 leaving Eau Claire, Wisconsin after a day campaigning in the Chippewa Valley

He was 30 minutes late arriving in Chippewa Falls because of the early morning flight. He appeared at Skogmo’s Cafe and spoke to about 100 people.

In his second morning stop in Bloomer, he engaged in retail politics, speaking to audiences, dedicating a new flag at a Catholic school, shook hands, At Hovland’s cafe in Bloomer, JFK told 50 people,

“The dairy farmer’s income remains at the level of 1937 and 1941. Nationally, the farmer is getting 50 cents an hour for his work.”

Continuing to play to his crowd, he chastised Secretary of Agriculture Ezra Taft Benson for proposing to reduce dairy production by cutting supports, calling it a “great failure.”

After his talk, which was hosted by George Witt and Norma Rock, JFK stepped into the kitchen to great the owner Rose Hovland, who promptly presented him with a 3 lb package of bologna made in Bloomer by a Carl Meyer. JFK grinned, took the package and promptly presented it his wife.

A local physician Dr. Merne Asplund then asked Kennedy about his support for the Forand bill, pending legislation providing medical assistance to some persons on social security and JFK responded that he thought that medical expenses for the elderly was “a great nation problem” and he would be supporting it strongly.

Later in the day, Kennedy continued to pander to regional interests, telling people that he supported research to develop milk with less calories so that weight conscious women would drink it, cited the need for a better form of powdered milk, and criticized the undue burden that excessive sanitation caused on dairy farmers. He also called for the need to stamp out brucellosis.

He closed each address with a request for support at the polls answered his own question about why a Wisconsinite would vote for a Massachusetts senator,

“You are not selecting a Congressman from the Ninth District or  senator from the state of Wisconsin, but a candidate for president of the United States. He added that they should pick a president with energy, ability, devotion, and judgement.

JFK finished the day of February 26, 1960 by returning to Eau Claire to take a tour on the city and then to attend a reception at the Elks Club at 8 PM, which drew over 1000 people.

However, despite the buzz over the three day campaign swing, support for JFK in the Chippewa Valley’s Ninth District was hard to come by. Kennedy was outpolled by Humphrey 58.5% to 41.5%