JFK was in Miami where he spent the day campaigning around town, including at the 163rd Street shopping center in North Miami Beach.

JFK worked the crowd with his charm and million-watt smile, joking:

“I come to Florida today where my family has lived for 30 years, where they have already voted for one of the two candidates, and I feel it looks pretty good at least to get two votes in Florida. (Applause and laughter) But I come here to this state which reaches like an arm toward Latin America, which is surrounded by sea, the water which laps Miami, laps Africa and Latin America and Europe. This state here is an advancing, moving and progressive state. Its brightest days are bound to come in the years of the 1960′s and 1970′s . . .” 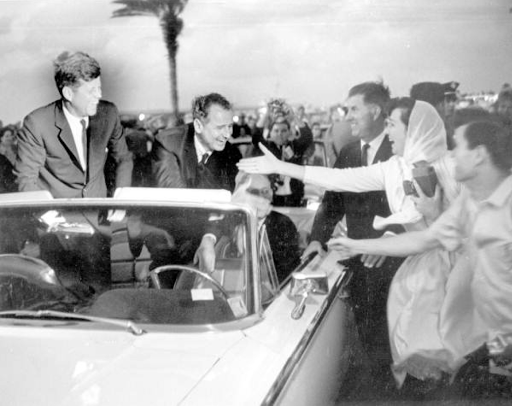 He went on to give a speech that closely adhered to his usual stump speech, warning that opponent Richard Nixon was out of touch with events and would not be able to get the country moving in the right direction