JFK spent the day campaigning in North Carolina. He was there at the urging of local politicians like gubernatorial candidate Terry Sanford who felt that he could win the state in the general election but only if he made an appearance to ask for votes.

During the day, JFK passed through Greensboro airport, where he stopped to talk with reporters. He flew into and visited Greenville, where he rode on the backseat of a limousine past the Pitt Theatre with Sanford and North Carolina First District Congressman Herbert C. Bonner. 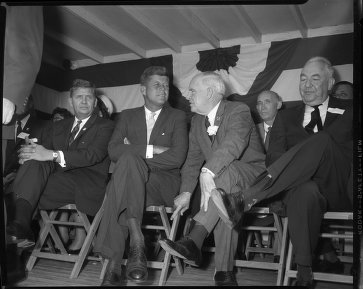 JFK also made an address to a large crowd at a stadium on the campus of University of North Carolina in Chapel Hill and made a speech at the Charlotte Coliseum.

Terry Sanford (the first southern Governor to publically support JFK) and North Carolina played a key role in the win for Kennedy. Sanford was asked to give the “seconding” speech at the Democratic National Convention and Luther Hodges was named as Secretary of Commerce in the Kennedy Cabinet.