On the “official” kickoff day of his fall campaign, September 5, 1960,  for President, JFK was in the expected place for a Democratic candidate to be – Cadillac Square in Detroit – in front of thousands of union workers. 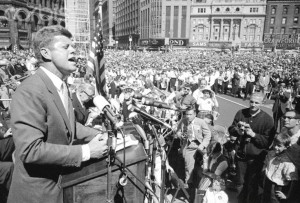 He had arrived the night before so as to be ready to spend the entire Labor Day holiday in a labor force bastion.