JFK spoke in Dover, New Hampshire on the eve of the New Hampshire primary. He spoke for about ten minutes and preseciently reminded voters that they would be selecting a leader for “the fabulous, demanding sixties.” He also contrasted the Democratic and Republican nominating process by broadly hinting that the Republican nominee was suspect because of the method that Richard Nixon was selected.

“The Republican Party had not asked the American people for their views on who their candidate should be. Their heir to the throne – the lone surviving heir – Mr. Nixon – has been carefully pre-selected by his party’s entrenched interest – pre-digested for the American people’s consumption – and pre-packaged for sale to the American voter.” 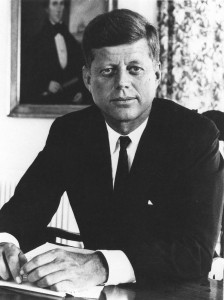