JFK visited Trinity College in Washington, DC. where he gave a commencement address. 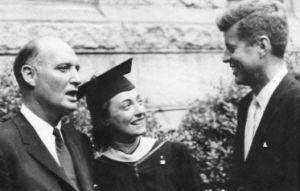 Among the graduates that he personally greeted that day were Barbara Bailey (Kennelly), who later served as a Congresswoman from Connecticut. Her father John Bailey served as a key aide in Kennedy’s 1960 campaign.