JFK was on the third day of a campaign swing through the Commonwealth of Massachusetts in his bid for re-election to the United States Senate.

In mid-afternoon, he was in Greenfield where he dedicated the Greenfield Regional High School, attended a public meeting at the New Four Corners school and courted the press by a visit to the Greenfield Recorder local newspaper.

He then moved onto Northhampton where he joined a parade, made an address at City Hall, attended the Hampshire County public meeting at the Smith School and visited another local newspaper, the Northampton Gazette.

Always willing to hop on a plane to get to a destination quicker, JFK then flew from Northhampton airport to Pittsfield where he had dinner at the Hotel Wendell-Sherwood. Afterwards, he went to the Bousquet ski lodge on Tamarack Rd to attend a Berkshire County Public meeting from 8:00 – 10:00 pm. 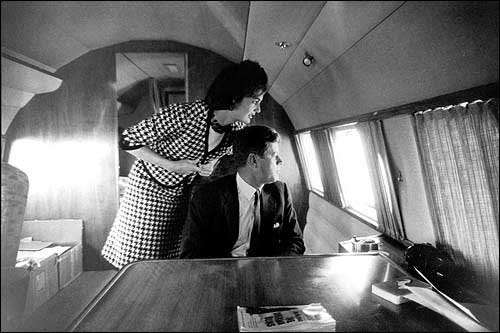 JFK and Jackie on his personal plane in an undated photo

JFK finished September 27, 1958 back at the Hotel Wendell-Sherwood where he spent the night.