JFK attended the annual Gridiron Dinner in Washington, D.C. Considered a “must attend” invitation by Washington’s power elite, JFK was invited to speak at the white tie event. 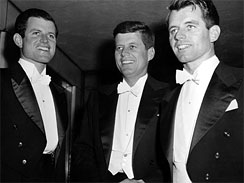 JFK and brothers at the 1958 Gridiron Dinner (photo courtesy cbsnews.com)

When his turn to speak came, he pulled a supposed telegram from his “generous daddy” and read it to the crowd of journalists, “Dear Jack, don’t buy a single vote more than is necessary because I’ll be damned if I’m going to pay for a landslide.”

The crowd roared with laughter. Kennedy went on with a joke suggested by his attorney Clark Clifford.