JFK was on the second day of a multi-town tour of Massachusetts while campaigning for reelection to his Massachusetts Senate seat. 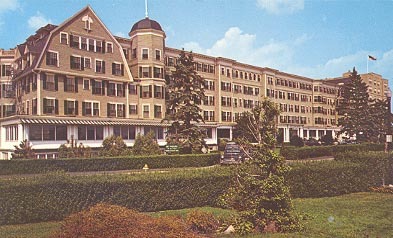 The New Ocean Hotel circa 1960

The Golden Age club made a presentation to  Jackie and then the group traveled in two open cars to visit the Sylvania Company plant.

JFK then traveled through Rawley-Newbury to Brown Square in Newburyport where he met with reporters at the town newspaper building.

Continuing his busy campaign day of September 25, 1958, he moved onto Amesbury where he had another session at the local Amesbury Daily newspaper and had an informal meeting and presentation at the Town Hall annex on School Street.

Meeting up at Route 110 at Merrimac, JFK made the 4th of his nine campaign stops for the day in Haverhill. He had a photo taken with the YMCA Board of Directors, visited the local post office (where yet another presentation was made to Jackie). visited an assembly at the Haverhill Trade School and did two more drop ins to the local newspapers.

Kennedy then took a 30 minute break for lunch at the Red Tavern Inn on Methuen Square and a public meeting at the town hall.

In Lawrence, Massachusetts, JFK attended an assembly at the Northeast Service Center on Route 128, visited the International Institute, did a public meeting at the town hall and visited the Lawrence Tribune newspaper.

In his next to last stop on September 25, 1958, Kennedy was in Andover where he visited the Tyre Rubber Company, did  yet another public meeting at the Town Hall with yet another presentation to Jackie of the “History of Andover”. The Andover Glee Club performed and JFK then went to the Andover Townsman newspaper.

In the last stop of the day, Jack was in North Andover, where he visited the  William Smith home at 27 Riley Court, visited the 50th anniversary gathering of Mr. and Mrs. Alexander Lang and for the only time on September 25, 1958, visited a fire station.

After taking a supper break at the Andover Inn, he went back to Lawrence for a public meeting at St. Mary’s Auditorium on Haverhill Street and then well past 10:00 pm JFK finally ended his campaigning on September 25, 1958, and headed back to Boston.