JFK was on the first day of a multi-day swing through the Commonwealth of Massachusetts as he campaigned for re-election in the 1958 Senate race.

He arrived in the historic fishing town of Gloucester, Massachusetts in midafternoon and went to the Seven Seas Wharf on Rogers Street. Accompanied by Jackie, he was met by Mayor Beatrice Corliss who presented a replica of the famous Gloucester fisherman to Mrs. Kennedy. 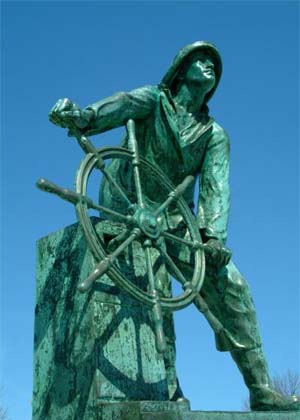 JFK then spoke briefly to a large group of fishery employees and made a quick drop by of the local newspaper building before heading onto his next stop in Danvers.

There his entourage met up at the junction of routes 128 and 62 and went to a public gathering on the steps of the Hunt Memorial Hospital. JFK’s schedule called for him to spend only 30 minutes in Danvers.

JFK next moved onto Peabody, Massachusetts, a town historically known for its leather tanning industry.  He toured the North Shore shopping center for about 15 minutes.

His next stop was Lynn, Massachusetts where the scheduled permitted him to rest over the dinner hour at the Hotel Edison for an hour or so before heading to address the Lady Elks convention at the New Ocean House in Swampscott at 7:15 pm.

To finish off his hectic and long day of campaigning on September 24, 1958, Kennedy held a public meeting from 8:00 pm to 10:00 pm at the Harrington School on Friend Street. He spent the night at the New Ocean House in Swampscott.