JFK was in Swampscott, Massachusetts where he was invited to address the Teachers’ Association Convention. He started his talk by using his famous and charming self-deprecation:

“I am deeply honored to be with you today on this occasion of such importance to the future of your profession, your state, and your nation. I come to you today as a refugee from a public school known as the United States Senate. There the course of instruction is often difficult, the recesses all too rare, and the recitation so lengthy that the entire class is frequently kept after school. There are, moreover, two major difficulties to this school on Capitol Hill: first, it is not always possible to tell the teachers from the students; and, secondly, while many mothers are clamoring to have their children admitted to the school, no student ever wants to graduate.” 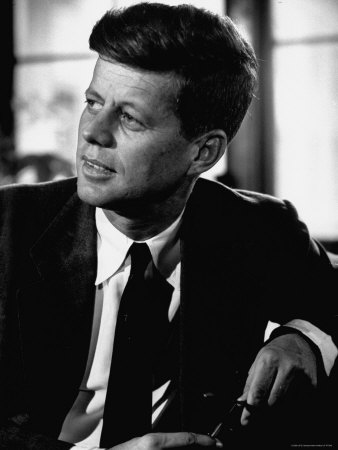 He then went on to remind the gathered teachers about their important role in American society:

“The people of American have entrusted into your hands the future leaders of this nation, the most powerful nation on earth – and the way in which you fulfill this trust, in the guidance and direction which you give to America’s youth, will have a more profound effect on our national future than perhaps any decision we may make in the Senate.”

Five days before this speech, the Soviet Union had launched the Sputnik satellitee and Kennedy, an anti-communist and friend of Joseph McCarthy, asserted that the outcome of the Cold War was not certain and stated, “We no longer complacently believe that the educational and scientific capabilities of this country cannot be duplicated elsewhere.”
and then went on to cite the pressing needs of America’s educational system.