JFK, acting very much like an old salt, wrote a jocular letter to Bobby, who had joined the Naval Reserve in Boston the previous month while finishing his last school year at Milton Academy. The swearing-in made the Boston papers, which produced some perhaps less than good-natured jabs,

The folks sent me a clipping of you taking the oath. The sight of your up there, just as a boy, was really moving particularly as a close examination showed that you had my checked London coat on. I’d like to know what the hell I’m doing out here, while you go stroking around in my drape coat, but I suppose that what we are out here for, or so they tell us, is so that our sisters and younger brothers will be safe and secure-frankly I don’t see it quite that way-at least if you’re going to be safe and secure, that’s fine with me, but not in my coat brother, not in my coat. In that picture you looked like you were going to ste,  outside the room, grab your gun, and knock off several of the house boys before lunch. After reading Dad’s letter, I gathered that cold vicious look in your eyes was due to the thought of that big blocking back from Groton. I understand that you are going to be there till [sic] Feb. 1, which is very nice because it is on the playing fields of Milton and Grotonm and maybe Choate, that the seeds will be sown that in later years , and on other fields, will cause you to turn in to sick bay with a bad back or a football knee.

Well, black Robert, give those Grotties hell and keep in contact with your old broken down brother. I just took the physical examination for promotion to full Looie. I coughed hollowly, rolled my eyes, croaked a couple of times, but all to no avail. Out here, if you can breathe, your one A. and “good for active duty anywhere” and by anywhere, they don’t mean the El Morrocco or the Bath and Tennis Club, they mean right where you are. See you soon, I hope. Jack. 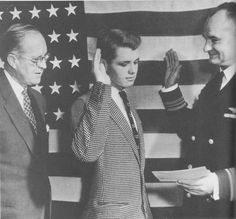