JFK’s commanded his crew and PT 109 on a night patrol in an attempt to find the “Toyko Express” Japanese supply convoy.

They were unable to contact the enemy in the water. However, Kennedy’s boat was spotted by Japanese floatplanes, who illuminated PT109 with flares and bombed it. Kennedy resorted to high speed zigzagging maneuvers and deployed smoke screens and managed to avoid a direct hit, although two crew members were injured in the attack. 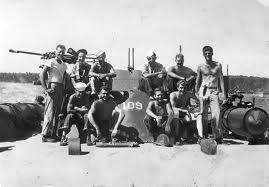