After a harrowing seven months of health crisis, including two back operations and being given last rites, JFK left his father’s estate in Palm Beach and arrived back in Washington, D.C.

After arriving at the airport, he declined the crutches and wheelchair that had been arranged for him and went directly to the Capitol building where he posed for the media.

He then walked unaided to his office in the Senate Office Building before leaving for his home in Georgetown. 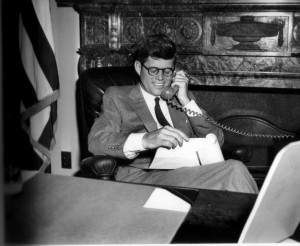 JFK in his Senate office