JFK appointed Orville Freeman as Secretary of Agriculture, although he was not the initial frontrunner for the job. After JFK soured on Missouri farm union leader Fred V. Heinkel Freeman was flown to Washington, interviewed with JFK and was offered the job on Kennedy’s Georgetown front doorstep in a whirlwind 48 hours. He served from 1961 to 1968. 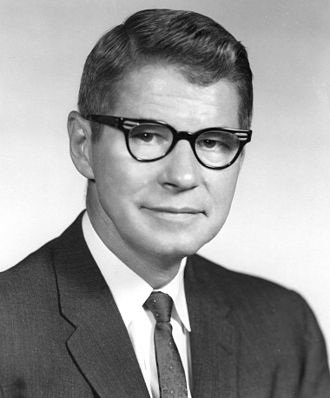 Freeman had a distinguished career before serving in cabinet. He was born in 1918 in Minneapolis and attended the University of Minnesota where he started his lifelong friendship and political collaboration with Hubert Humphrey. He dropped out of law school to serve his military obligation with the Marines in the South Pacific and won the Purple Heart for combat wounds.

After the war, he completed his law degree and joined a private practice in Minnesota. He lost elections for Minnesota Attorney General and Governor before winning the state house in 1954. He was a founder of the Minnesota Democratic-Farmer-Labor Party.

His most notable act while in the Department of Agriculture was submitting the proposal to create the Food Stamp program.