Famed journalist Edward R. Murrow finished his illustrious career in the Kennedy administration of the Director of the United States Information Agency. 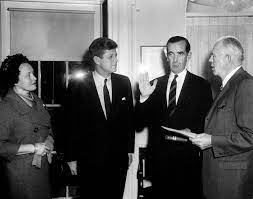 Murrow, who changed his name from Egbert as a young man, rose to international fame for his radio reports from London at the beginning of World War II, using the signature moniker, “THIS… is London.” During the rest of the war, he recruited a group of like-minded journalists that eventually came to be known as “Murrow boys” to cover every aspect of the campaign.

One young WW II journalist who would not become a Murrow acolyte was Walter Cronkhite. They grew to be bitter rivals at CBS after the war. Murrow, who had an intense, combative style both in front of and behind the cameral, resenting Cronkhites smooth affable style and willingness to tolerate the increasing commercialization of television.

Despite his irascibility, the chain-smoking Murrow’s journalistic accomplishments included helping the end of the McCarthy era and first publishing the link to tobacco and cancer.

Murrow had just been let go by CBS when JFK offered him the USIA job. Kennedy (always more interesting in foreigh affairs) wanted to highlight his internationally and maximize his overseas press coverage. Murrow took the job only on the condition that he would have close and regular access to the president. However, by the second year of the administration, Murrow started to become ill from lung-cancer and was increasingly less able to contribute. He died in 1965.