Peter Joseph Cloherty was one of the early hires in JFK’s 1946 race of the Congress. He was born in Boston in 1923 and was the son of motorman who worked on the elevated trains in Boston. 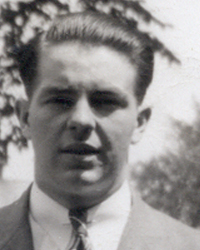 Cloherty attended Brighton High School and remained active in alumni affairs after he was discharged from the Army for a bum knee. He met Kennedy when Jack was the speaker at an alumni dinner. After Kennedy’s speech, he mingled with the crowd and complimented Cloherty for the way he put together the affair. He asked Cloherty to pay him a call at the Bellevue Hotel, where Kennedy was living.

Cloherty, unlike Jack, had spent his entire youth and school years in Boston and had important political contacts. One such fellow as Massachusetts legislator Charles J. Artesani, whom Cloherty had worked for as a political volunteer and Cloherty helped put Artesani firmly on the Kennedy

Cloherty described his work for Kennedy on the campaign to an earlier historian,

I used to get to the Bellevue about eight or eight-thirty every morning. I’d get his schedule worked out for the day; then he’d leave with Billy Sutton. Then I spent the day making appointments for the days ahead and writing thank-you letters to people he’d already met or talked to. When he finished the last appointment of the day – about eleven-thirty or twelve at night-I’d take a folder full of letters for him to sign over to the Ritz second floor lounge where he’d go for supper. He was a great one for tomato bisque and ice cream. He’d sit there, eating his bisque and ice cream, and go through the folder of correspondence, signing the letters, adding postscripts, and so on.