Kohei Hanami was the commander of the Japanese destroyer Amagiri on the night it collided with PT 109. 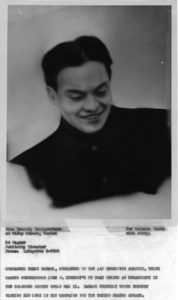 Hanami apparently bore JFK no personal ill-will once their status as enemy combatants in WWII ended. In fact, a letter from Hanami was published Sending JFK best wishes in his Senate campaign. The New Bedford Standard-Times on Sunday, October 19, 1952 included this passage about the letter sent by Hanami,

A pleasant echo from the desperate South Pacific sea battle that almost took the life of Congressman John F. Kennedy, then a PT-boat commander, has just reached him. In an earnest if not perfect English translation, the commander of the Japanese destroyer that cut Kennedy’s boat in two nine years ago wrote him:

“I am firmly convinced that a person who practice tolerance to your former enemy like you, if elected to the high office in your country, would no doubt contribute not only to the promotion of genuine friendship between Japan and the United States, but also the establishment of a universal peace.”

This is heartwarming! I don’t think it’s placed in the correct category. They were enemies by the dice roll of fate, but friends by choice!