Marlin was JFK’s 52 foot cruiser that was normally docked at the Kennedy compound in Hyannisport. It had been built in 1930 for Edsel Ford and purchased by Joseph Kennedy in 1950. It was owned by the family until 1970. 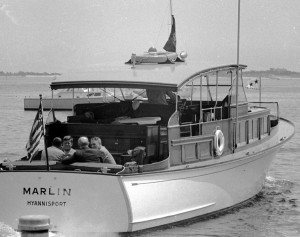 Kennedy spent considerable time on this motor boat after he returned to Cape Cod at the conclusion of the 1960 Democratic convention. Accompanied by his brother Robert and wife Jacqueline, he read The American Senator by Anthony Trollope and read aloud selected excerpts from political journals and new magazines.