Walter Rostow was a Kennedy White House advisor known for his support of a muscular and vigorous role of the United States in managing and directing the affairs of Third World countries. He was the lead on the South East Asia task force set up by Kennedy. 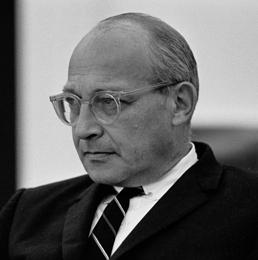 He was a former student at Yale of Richard Bissell and on Tuesday, April 18, 1961 he drove to CIA headquarters in his Volkswagen to assess the invasion-turned-disaster with his old mentor.