JFK visited Venezuela in December, 1961 during a formal state visit. 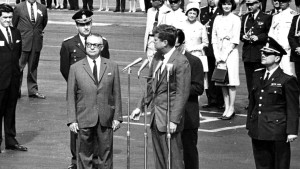 JFK and Jackie in Venezuela, December, 1961

Kennedy was acutely aware that the many impoverished states and political instability in the region of Latin America was potentially fertile ground for the expansion of Soviet influence. To counteract this, early in his administration he unveiled the Alliance for Progress, a partnership between North and South America to nurture mutually beneficial relationships.