Rosemary Kennedy was born on September 13, 1918 at her parents home in Brookline, Massachusetts and died January 7, 2005. She was the oldest daughter and third child of Joseph and Rose Kennedy. 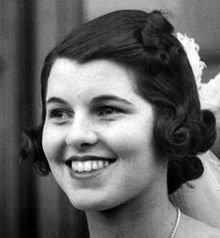 Rosemary Kennedy being presented at the British Royal Court in 1938 (photo courtesy wikipedia.com)

The family Kennedy has always maintained publicly that Rosemary was born mentally retarded and her 1941 lobotomy at age 23 was an attempt to treat her condition.

The family version of Rosemary’s condition and what actually happened to her has changed over the decades. Her mother, Rose Kennedy, in a 1974 interview stated,

And I talked to the doctors and then I realized that she was what was called then a retarded child. Of course, I had never heard of children that were so afflicted. And we took her to different doctors but there didn’t seem to be any help for her at that time.

As she grew older, she unfortunately grew progressively worse. Now, she is in a home where she is away from all of the excitement, all of the competition that there was at that time in our family

She was much better off with children of your … with young people of her own potential. That’s the thing and they have everything geared to…

Interviewer:  “And you see her frequently.”

Rose:  “And we see here frequently. It’s a heartbreak for everyone, of course. But, as I said, God sends those things as he sends those other things.”

However, at odds with the official family version of Rosemary’s condition  is information about Rosemary from the archival record, as several other biographers have noted. Contemporaneous family records simply do not record any cognitive or physical and motor disability relating to Rosemary, including Rose’s own diaries from the period of when Rosemary was a toddler and small child.

In fact, in support of her appropriate level of functioning in later years, the family record details a solo vacation trip to Ireland taken by Rosemary when she was twenty one – a trip notable in Rose’s diary of that time for the joshing and teasing Rosemary endured from the Kennedy family because of her weight gain during the trip. In addition, Rosemary was allowed to escort and supervise a 16 year old Eunice on a trans-Atlantic crossing.

Her level of frustration grew so high that she became almost impossible to handle. Every day there would be fights where Rosemary would use her fists to hit and bruise people, long absences at night when she’d be out wandering the streets and violent verbal exchanges.

Although an accurate diagnosis is lost to history because of the inability to perform a complete exam, the stories seem to support the theory that she may have had a developing psychiatric condition such as bipolar disease or schizophrenia – both conditions that often present in teenagers and young adults with quickly developing emotional and behavioral problems.

Authors are always fetishizing every detail of her public life today to prove that she was “normal”, but if the Reelz Channel’s portrayal of Rosemary is accurate, I can’t blame Joe for getting her the lobotomy. One can’t find much information about the scarier aspects of her pre-lobotomy life, though.