JFK hated to be alone and the role of chief companion fell to Dave Powers was probably the person who spent the most time with JFK on a day-to-day basis in the White House.

David Francis Powers was a first generation Irishman born on April 12, 1912. He was the son of John Powers and Catherine Green Lowney Powers who were both born in County Cork. 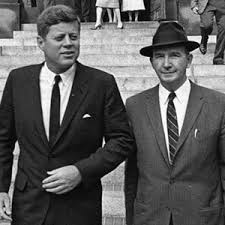 His father worked as a miner in Butte, Montana before finding his way to the docks of Boston Harbor. He died of influenza in 1914, when Powers was two.

His mother had been previously widowed with six young children when she married Power’s father and had two more sons in her second marriage, Dave and Edward.

Dave attended parochial schools in his Charlestown neighborhood and at the age of ten began selling newspapers at the Boston Navy Yard gate to help support his widowed mother.

As his newspaper business grew (he could sell 1000 copies on a Sunday) he hired Billy Sutton to help him.