Lennie Thom was the executive officer of PT 109 when it was sunk the Japanese troop transport ship the Amagiri. 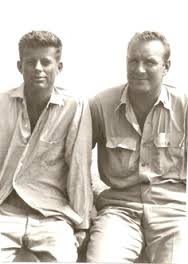 Before his service in the Navy during World War II Thom was a student at Ohio State University, where he played guard and tackle on the football team. He was skilled enough to also play semi-pro football with the Columbus Bulls.

Engaging and likable, Lennie was a natural leader. During the summers in college he worked as a foreman on a farm crew harvesting crops. After he graduated in 1942, he joined the Navy V-7 program before he volunteered for PT service.

During the shipwreck ordeal of PT 109, the crew unanimously credited Thom (while Jack was separated trying to find help) with keeping their spirits from flagging and instilling hope for a rescue.