James Ayer Rousmaniere was a close friend and roommate of JFK’s at Harvard. He was born in 1918 in New York City and graduated from Harvard in 1940.

Jimmy was one of Kennedy’s friends who was instrumental in getting the less socially advantaged Jack admitted to the Spee Club. He also knew Joe Kennedy, Jr. as he did all of the Kennedy’s. He was a frequent guest to Hyannis Port.

Jimmy was an avid sailor and captained the Harvard sailing team and with Jack and Joe, Jr. won the Intercollegiate championship in 1939.

Rousmaniere served in the Army in the European theatre, and married the daughter of his commanding general, the former Jessie Pierce of San Antonio.

After the war, Rousmaniere entered into a business career and became active in fundraising for Harvard and other non-profits. He and Jessie had seven sons and one daughter. He died in 2004.

The photo below was taken in the family’s backyard in Oyster Bay, New York and sent to JFK during his presidency by Rousmaniere. 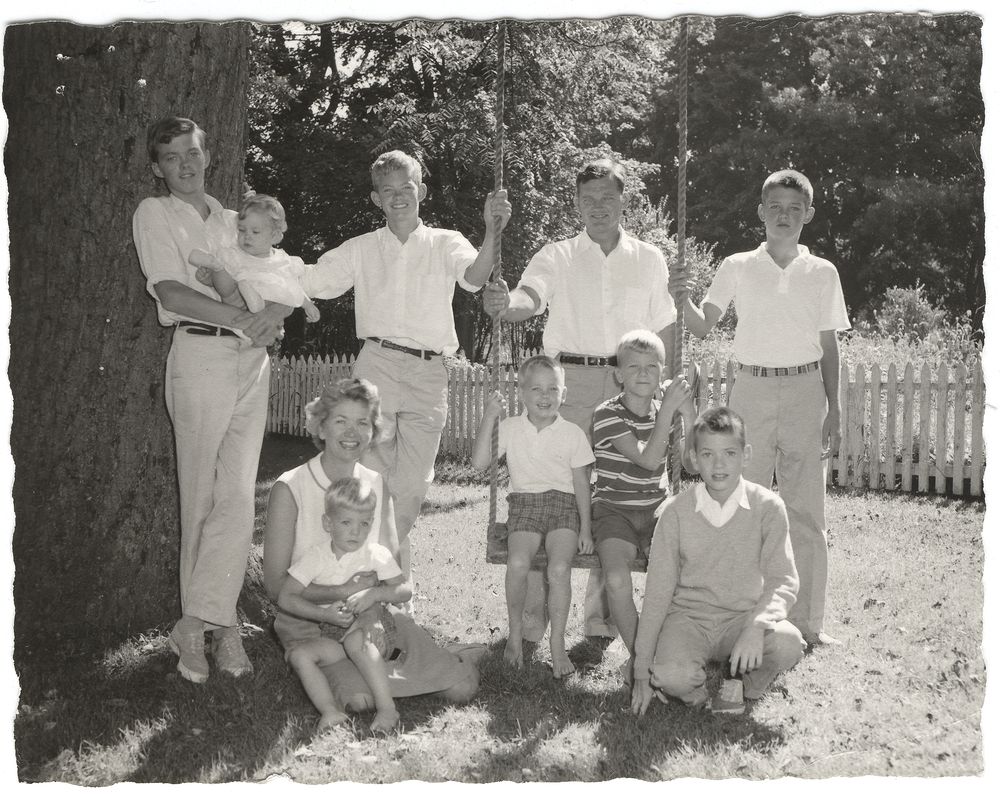 Jim Rousmaniere and family at Oyster Bay, New York circa 1959

Now that is a handsome looking family.

Good for you Jimmy Rousmaniere!

This website uses cookies to improve your experience while you navigate through the website. Out of these cookies, the cookies that are categorized as necessary are stored on your browser as they are essential for the working of basic functionalities of the website. We also use third-party cookies that help us analyze and understand how you use this website. These cookies will be stored in your browser only with your consent. You also have the option to opt-out of these cookies. But opting out of some of these cookies may have an effect on your browsing experience.
Necessary Always Enabled
Necessary cookies are absolutely essential for the website to function properly. This category only includes cookies that ensures basic functionalities and security features of the website. These cookies do not store any personal information.
Non-necessary
Any cookies that may not be particularly necessary for the website to function and is used specifically to collect user personal data via analytics, ads, other embedded contents are termed as non-necessary cookies. It is mandatory to procure user consent prior to running these cookies on your website.
SAVE & ACCEPT
JFK
wpDiscuz
2
0
Would love your thoughts, please comment.x
()
x
| Reply