Edward McLaughin, Jr. was an attorney and friend of JFK. It was to McLaughlin that Kennedy made his infamous remark about the women that he dated, “I think they see a dollar sign.”

McLaughlin first met Kennedy when they served as lieutenants in the Solomon Islands in 1943. McLaughlin was from Boston and had graduated from Dartmouth in 1942, enlisting soon after graduation. He was eventually sent to Officer Candidate School at the Harvard Business School and was sent to the South Pacific as a supply officer there in 1943.

Although not required to do so, he often went out on patrol on PT boat missions, surviving some close calls. It was likely on one of these sojourns that McLaughlin met Kennedy, another young Navy officer with deep family roots in Boston.

After several months in the Solomons, Ed came down with “dinky fever”, a likely case of dengue fever. While he was in Sick Bay, he heard of the sinking of PT 109, the boat commanded by his good friend Jack Kennedy. 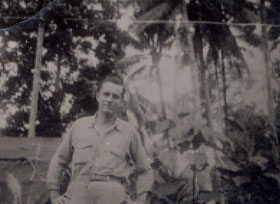 Ed McLaughlin in the Solomons in 1943

McLaughlin was still in Sick Bay  when Kennedy and his surviving crew were admitted after their dramatic rescue several days later.

After recovering from his tropical fever, McLaughlin eventually followed Kennedy back to Boston after the war. The two young veterans stayed in touch. McLaughlin was one of a handful of Kennedy’s naval comrades who supplied brains and muscle in the push to get JFK elected to Congress in 1946.

Ed also caught the political bug and went on to a distinguished political career as president of the Boston city council and lieutenant governor of the Commonwealth of Massachusetts.

He stayed in touch with Kennedy through the years, albeit on a less frequent basis as JFK attained national prominence. McLaughlin was invited to and attended Kennedy’s wedding to Jacqueline Bouvier in September, 1953.