Dinah’s Shack was a popular restaurant in Palo Alto that Jack took his dates, including Flip Price to for a meal. It originally opened in the late 1920s as a chicken on toast joint, but by the fall of 1940 had morphed into a steak house with a bar and fireplace. It was located in south Palo Alto on the El Camino Highway in the Restaurant Row (Rte. 101.)

The restaurant has morphed through several iterations over the decades but is still operating in 2021. 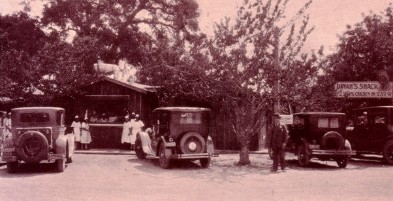 It originally opened in the late 1920s as a chicken on toast joint, but by the fall of 1940 had morphed into a steak house with a bar and fireplace.