Dean Martin reportedly first met Jack Kennedy when they were both in Chicago. Martin was working with Jerry Lewis doing a comedy  act at the Chez Paree club.

Martin spent the night carousing with the young Congressman and reportedly came away “unimpressed.” 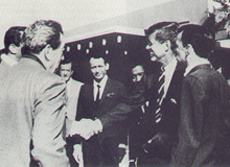 Although the heyday of the group lasted only several years from the late 1950s to the early 1960s, during that time they accrued a large dose of the “cool” factor and built an extensive network of celebrities, associates, contacts, and business partners.

This fact was not lost on Joe Kennedy as he sized up the landscape and potential fundraising sources for his son’s run for the Presidency and Martin, although not hugely interested in politics like Frank Sinatra, got pulled into the Kennedy orbit through his membership in the group.