JFK arrived in Hyannis Port with the news that he had been accepted into the Motor Torpedo Boat Training School in Melville, Rhode Island. His mother Rose Kennedy relayed the news and her misguided impression of Jack’s fitness to her oldest son Joe, Jr. in a letter,

“You can not believe how well he looks and how he has improved in his general attitude toward the ordinary conditions of life. . . You can really see how his face has filled out. Instead of being lean, it has now become fat.” 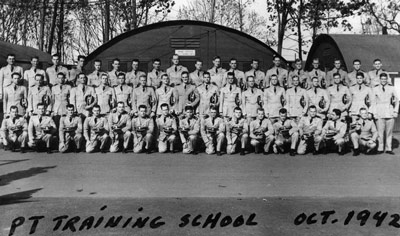 JFK at the Melville Motor Torpedo School in October, 1942. Kennedy is the back row seventh from the right (photo courtesy (johnfkennedyship.com)