November 8, 1960 was Presidential election day in America. John F. Kennedy left his hotel room in Boston at 8:30 am. for a short ride at the head of his motorcade to a recently abandoned West End branch of the Boston Public Library.

At 8:43 am he signed his name on the voter rolls and cast his vote in the Third Precinct of the Sixth Ward, listing his long-held apartment at 122 Bowdoin Street as his address.

He was accompanied by his 8 months pregnant wife and a throng of photographers, reporters, and aides. After briefly posing for photographers as he was leaving the voting booth, a fatigued and tense-looking Kennedy made his way to his car (a convertible with the top closed) for the trip to Hyannisport. 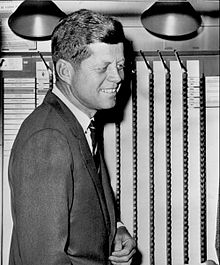 A heavy-lidded, fatigued JFK voting in the 1960 Presidential election.

The motorcade, consisting of a leading car carrying press, followed in succession by Kennedy, a security car, and three cars carrying reporters moved out of the West End, through Scollay Square, through the tunnel under the East End and finally arrived at the airport.

At the airport, eschewing his customary bounding up the stairs, he trudged up the stairs. Those on the tarmac saw the stooped man in the grey suit and blue mohair overcoat disappear into the cabin without his normal wave to those below.

The flight to his family’s compound at Hyannisport was 25 minutes. Kennedy was accompanied by several planeloads carrying 80 staff members and 100 reporters, many jostling to be close to him. The chaos was sufficient that one reporter who had covered him in a very positive light throughout the campaign complained that her position in the press pool was being usurped and asked him to referee the chaos. Apparently, sympathetic to her situation, he reportedly replied, “You and I will never be apart, Mary.”

Once on the ground in Hyannisport, he eschewed the gaggle of local politicians who hoped to escort him through town. Instead, he asked his cousin and long-time family aide Ann Gargan to drive him to his family’s grouping of houses at the end of Scudder Avenue.