JFK met in an off the record session at the Parker Hotel in downtown Boston with around 25 mostly Jewish legal professionals. He was viewed with suspicion by many as holding anti-semitic views in light of the resolution he introduced to Congress to reduce appropriations to Middle East by $175 million. 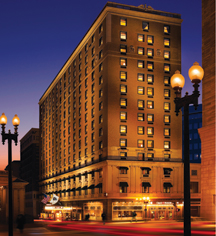 This had been interpreted by reporter Eddie Michelson in The Berkshire Eagle as an anti-Israel stance. Jack desperately needed Jewish votes in this upcoming Senate campaign. During the meeting, he explained to the assembled lawyers and judges that the resolution was only an attempt to prevent money going to despotic regimes that had little chance or reaching the everyday citizens who needed relief.

Hirsch Freed attended the meeting and recalled that they “went away satisfied of the brilliance and his leadership and of his true devotion to any cause he espoused.”