Jack Kennedy escorted Jackie Bouvier to the last session of the 1951-2 season of the Dancing Class.  This long-time D.C. institution was an invitation-only series of dances attended by the Washington elite.

At the time, Jackie was engaged to New York stock broker Johnny Husted but he was unable to make it in time to escort his fiancee. Martha Bartlett, wife of journalist Charles Bartlett, suggested she invite Jack instead.

The evening started with a dinner party at Merrywood that Jackie and her sister Lee gave. In addition to Jack and Lee’s date for the evening Michael Canfield, the party included Langdon Marvin and Gloria Emerson.

The group arrived at the Sulgrave Club on Dupont Circle a bit for 11 pm. Wearing white tie and tails, Jack seemed to lose interest in the party and broke off early from the festivities to talk with Arthur Krock about foreign policy. Later, when Jackie went to the powder room, Jack cut in on pretty brunette who had caught his eye. 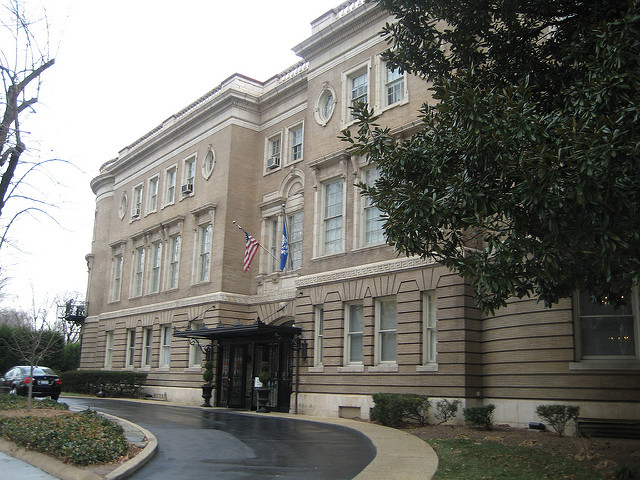 Returning freshly powdered with newly applied sparkly eye shadow, Jackie cut in on Jack and pulled him onto another area of the dance floor. As JFK shuffled clumsily, Jackie began softly singing the words to the Cole Porter song that was playing, leaning into his face until her lips brushed his cheek.