JFK officially announced he was running for the 11th Congressional District in Massachusetts.The announcement was made at the Parker House Hotel, the same establishment where JFK’s buddies held his bachelor party.

The seat was being vacated by James Michael Curley after some backroom negotiations by Joe Kennedy, Sr. The district covered wards 1,2, and 3 in Boston, ward 22 in Cambridge, and wards 1, 2, and 3 in Somerville. 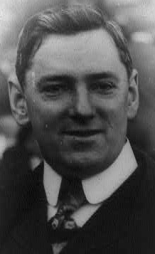