Charles Bartlett the Pulitzer Prize-winning journalist who famously arranged the dinner party where JFK and Jackie first met as adults.

He remained a personal friend of JFK and one of the few Catholics in his inner circle. He was by all accounts aware of JFK’s philandering and sometimes took part in the procurement of women for Kennedy.

Like other journalists in Washington, JFK was particularly adept at cultivating relationships with journalists. Bartlett sometimes accompanied JFK on the campaign trail. Bartlett recalled one incident when JFK was campaigning in West Virginia and lost his voice. Worried about the outcome, JFK wrote a series of notes on cards detailing his discouragement over the outcome and passed them to Bartlett.

JFK and Jackie felt so warmly toward Bartlett and his wife that they were asked to be godparents to John F. Kennedy, Jr. 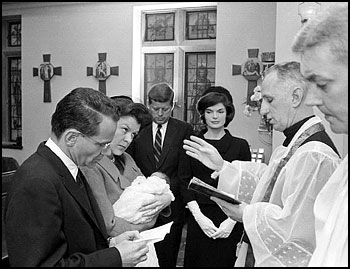 The kennedys and the Bartletts at the christening of JFK, Jr. (photo courtesy of washingtonpost.com

Bartlett was a 1943 graduate of Yale University. After the war, he worked for the Chattanooga Times where his investigations led to the resignation of Harold E. Talbott as Secretary of the Air Force.