Shortly after the New Year’s Day in 1945, JFK left the East Coast for Castle Hot Springs in Arizona, a longtime resort and spa about 50 miles north of Phoenix in the Bradshaw Mountains.

The Castle Hot Springs resort, which closed as a resort in 1976 after a fire destroyed the main building, had a lengthy and storied history, starting with the Apaches, who used the hot mineral springs for healing. The commercial resort at the Springs was populated by the wealthiest and most powerful families in America, including the Roosevelts, Rockefellers, Carnegies, Cabots, and Wrigleys. Well-known author Zane Grey was a frequent visitor. 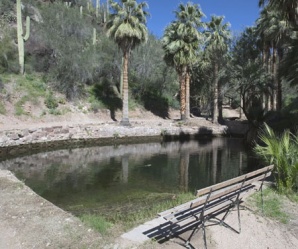 He had discussed a possible political career with his father over the previous Christmas holidays during his stay at Palm Beach. The plan had been settled to try for the Congressional seat being held by the legendary Boston pol Michael Curley, which would be open after Curley accepted a bribe from Joe Kennedy to vacate the seat.

But, JFK’s first task was to rest and relax and try to regain some measure of strength and vigor. With a plan to work on the memorial volume he was compiling about his brother, he settled in at the spa, which had been leased to the military to house recuperating pilots during World War II. However, much to Kennedy’s consternation, the Castle Hot Springs spa was largely frequented by a much older crowd than Jack was used to running with. He was openly disgruntled about his stay in a letter to his Navy friend Red Fay. He complained that the food was,

“…. just fair. You can have all you want for thirty bucks a day…but, if I stay here very long, I’m going to end up my life scratching a beggar’s ass.”

He went on to complain,

“….I’m sorry to that I haven’t come through with a report on how the Irishman is doing. Frankly, Red, it’s a bit slow. Either they haven’t read the August issue of the Reader’s Digest or something, for everytime [sic] I introduce Kula Gulf into the circle (in itself no mean feat), the conversation just seems to pick itself up and walk into a corner and die.”

He went onto write,

“I don’t mean it in a derogatory sense….it’s just that Castle Hot Springs is where self-panickers come to die.”

Jack spent his days at Castle Hot Springs dining on steaks shipped by his father, working on the book about his brother, horseback riding in the surrounding mountains, boning up on the local political scene 3000 miles away through subcriptions to the Boston Herald and the Boston Post, and reading material forwarded to him by his grandfather’s secretary at the Boston Port Authority.

He also spent much time with a new friend he made at the resort – Patrick J. Lannan of Chicago, Illinois – eventually living with him in one of the resort’s cottages.