Abe Ribicoff was the Democratic Governor of Connecticut and a long-time political ally of Kennedy. While not in the innermost JFK circle Ribicoff played a key role in the election of Kennedy to the Presidency. 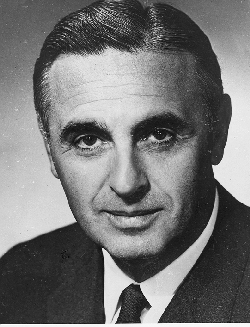 Ribicoff and JFK started  to work to each other’s benefit when both were elected to Congress after the War. Their alliance was sufficiently strong that JFK was asked to give the keynote speech at the 1954 Connecticut Democratic Convention at which Ribicoff was nominated for Governor.

Jack returned the favor in 1956 when Ribicoff was invited by Kennedy to be the keynoter at the Massachusetts Democratic Convention in Worcester. It was at this convention that Ribicoff acted as JFK’s proxy and suggested that Kennedy ought to be considered as Adlai Stevenson’s Vice Presidential candidate.

In 1959 when the campaign for the Presidency began in earnest, Ribicoff teamed up with long-time Democratic operative John Bailey to maneuver Kennedy into the best political light and to combat the “Catholic problem.”

One story Bailey told about Ribicoff’s participation in the campaign goes as follows:

Abe Ribicoff, Bailey, and Kennedy were at a political meeting in Augusta, Maine in November of 1959. After the meeting was over the trio flew back to Hyannis Port in a driving rain. Ribicoff, who was a meticulous dresser, stepped out into a puddle and had his hat blown off. Exasperated, he turned to Bailey and said, “What am I doing here?” Whereupon Bailey said, “Well, you wanted to be on the campaign trail.”

Kennedy repaid Ribicoff’s help by spending part the early morning hours of Sunday, November 6, campaigning in Connecticut, even the state was judged to be a safe state.