JFK called 294 Pondfield Rd, Bronxville, New York home from May of 1929 until January, 1942. Joe, Sr., frustrated by his inability to be accepted by the social elites in Boston moved his family to this 5.5 acre hillside estate called Crownlands.

The house was a Georgian style mansion. The Kennedy houses were not known for their elegance or chic and in fact were sometimes described as shabby and worn. However, in Bronxville, there was a grand piano near the entranceway with twin fireplaces at either end of the main sitting room. The rooms were finished with beige carpets and antique finished green paneled walls. Vases held white calla lillies. 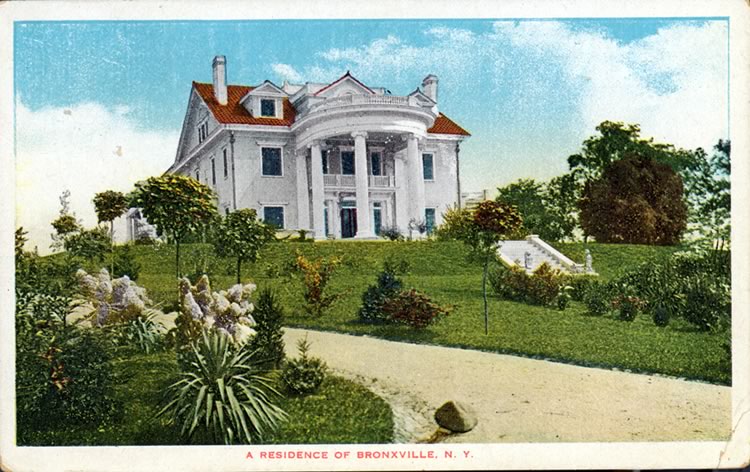 Postcard of 294 Pondfield as it looked five years before the residence was purchased by Joe Kennedy (photo courtesy westchesterarchives.com)

In a space off the main drawing room, Rose Kennedy had arranged immaculate rows of books – complete sets of Shakespeare and Hardy. The furniture in the house stood on Oriental rugs, including a coffee table holding a copy of Joe Kennedy, Sr.’s “I’m for Roosevelt” and a period table in the main living room with a book of Vincent van Gogh’s paintings.

Rose Kennedy was a bridge player and a table with four chairs was pushed into a corner. The grounds contained a grass tennis court on one side of the house, a teahouse, a greenhouse, and multiple gardens.

In the decades after the Kennedy family sold the estate, Crownlands was demolished with the acreage being subdivided into the development of Crown Circle.